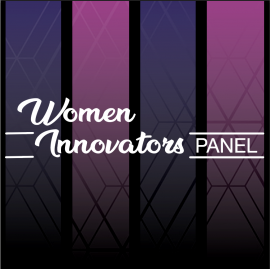 Presented by the Union Program Council and the College of Business Center for Advancement of Entrepreneurship, the panel will provide inspirational and entrepreneurial insight into how they run their businesses and what they learned from K-State. Following the panel, engage with the conversation via question and answer session. “Women Innovators” will be presented at 3:30 pm on Thursday, Oct. 21 in Wildcat Chamber on the first floor of the K-State Student Union.

Sheila Ellis-Glasper is the founder of SEG Media Collective. Born and raised in the sunflower state of Kansas, Glasper is a graduate of K-State, earning a degree in journalism and mass communications. She is a nationally published journalist featured in USA Today, Chicago Tribune, ESPN and CNN. In her reporting career, Glasper leveraged the importance of social media to build relationships and to stay ahead of the competition.

Cynthia Fails is the founder of LaunchCrate Publishing. Fails was an educator who found herself between jobs when a reorganization no longer aligned with her core values. In between work Fails wrote, illustrated and published her first children’s book. Following her passion she learned the ins and outs of publishing and also discovered that self-publishing did not favor the writers but instead the platforms with which authors used to self-publish. LaunchCrate was created to provide a method for writers to launch their ideas into the world while keeping the portion of profit they deserve.

Mindy Allen is a Scott City native and 1990 graduate of Scott Community High School. Allen earned a degree in graphic design from K-State in 1994. She started in mural painting by doing her children’s and nieces’ bedrooms, and would get calls from people asking her to paint murals in their homes. Allen turned her love of art into a professional mural painting business, Mindy’s Murals with pieces ranging from large scale business projects to individual home projects that can be found throughout the state.

Lyndsie Schroeder is a current K-State student who has a love for creating, dreaming, traveling, and all things outdoors. Schroeder currently has her own photography business and has been the winner of Launch the past three years. She plans to pursue that business idea after college with her ultimate goal is to open a business within the health and wellness industry to help others live their best and healthiest life possible.

An opening reception for the accompanying art exhibit, “K-State Innovators and Entrepreneurs”, will follow the panel discussion in the William T. Kemper Art Gallery. Highlighting the panelists as well as other exciting K-State entrepreneurs, this exhibit will include additional profiles from other successful K-State alumni. The exhibit will also feature a custom mural by panelist Mindy Allen showcasing the pride, community, and spirit of the Union and university.

The panel and gallery reception are open to all with no charge for admission or pre-purchased tickets required. The gallery will host the exhibit for the remainder of the semester and will be open during normal business hours following the event.