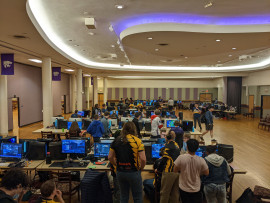 The “Leagues of Legends” tournament results were KU, first, K-State, second and the University of Missouri-Kansas City in third.

Recordings of select matches can be view with the links below

The Union’s mission is to serve all, especially students, with facilities that provide services, programs, leadership experiences and educational opportunities which foster a sense of wellbeing and belonging in an inclusive community.