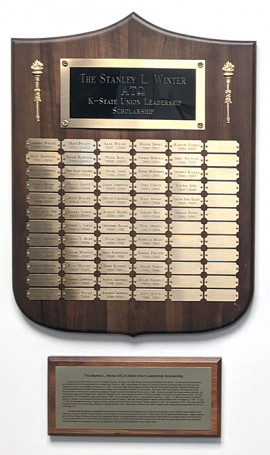 It is awarded annually in April to at least one outstanding student who possesses leadership abilities and capabilities and who is dedicated to the service and betterment of the Union.

Stanley Leon "Stan" Winter was born in Andale, Kansas, on March 16, 1964, the son of Alvin and Margaret Anne Winter. He was raised and educated in the Andale community and graduated from Andale High School in 1982. Stan pledged the Alpha Tau Omega Fraternity at Kansas State University and was initiated into Delta Theta Chapter on February 11, 2984. He served the Delta Theta Chapter as Worthy Sentinel, Scholarship Chairman, Brother Chairman, Assistant Membership Education Chairman  and member of the Executive Committee for three years. Stan was Delta Theta Chapter's Thomas Arkle Clark National Award nominee and received the prestigious Chapter Adviser's Brotherhood Award, both in 1986. He was involved in numerous campus activities, but most prominently at the K-State Student Union. Stan was president of the Union Program Council (UPC) and a member of the Union Governing Board. He was awarded the UPC Outstanding Leadership Award in 1986. Stan graduated with honors in Agricultural Economics in 1986. In 1989, he received his Master's Degree in Student Counseling with honors from Kansas State University. Stan was hired as program advisor at the Union on October 23, 1989. On July 1, 1990, he was appointed Acting Program Director, serving until he returned to his Program Advisor position in 1991. In September of 1991, Stan was appointed Program Director at the University of Northern Colorado Student Union. Stan died at the age of 27 on February 23, 1992, in Andale, after a long and recurring battle with cancer.

This Memorial Scholarship is dedicated to the memory of Stan Winter and recognizes his unselfish and substantial service to Delta Theta Chapter of the Alpha Tau Omega Fraternity and its members, Kansas State University and its students, and the Union, its staff and student volunteers. It was endowed by the Winter family, Brothers of Alpha Tau Omega and friends. It is given annually in April by the Kansas State Alpha Tau Omega Students' Aid Endowmen Fund, as selected by a Joint Committee of the Endowment Fund, the Winter family and the Union, to at least one outstanding student who possesses leadership abilities and capabilities and who is dedicated to the service and betterment of the Union.